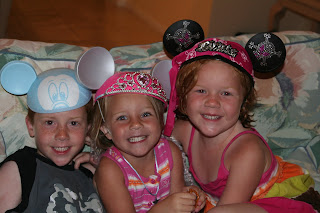 Well we survived the most magical vacation ever! Disney World was amazing, thrilling, magical and exhausting all in one! The kids were very lucky to have their Nama, Papa and Aunt Denny along for the ride and I think they definitely exhausted them, as well as, us. :) I think we could have spent a week just at the different Disney parks and still not seen everything. We hit the Magic Kingdom 2 days, Animal Kingdom, Epcot and 2 days at Blizzard Beach Water Park. We also got to go the Kennedy Space Center which was pretty cool. We had occasional rain that did not put too much of a damper on our activities. We just threw on ponchos when it got bad.

I have to say it is has been a long time since I went to all of the Disney parks. It was so amazing to watch the kids meet the characters that they have read about and watched on TV for so long. Ally by far showed her emotions the most. She would start jumping up and down when she saw the characters and could not stop. She gave so many hugs, as did Jack and Meg. You did not really see the characters just walking around a lot. That is a memory I have from when I was a kid where they seemed like they were everywhere. But, they had nice buildings you could go into and they had the characters lined up to get autographs. That was really nice! One shot deal!

To me the most magical parts were:
- Snow White - She was by far the most amazing character we met. She talked and talked and talked to the kids for so long. It didn't matter that she had a long line of kids waiting. She was truly amazing
- Electrical Parade - What can I say. We had tossed around not doing this, but finally things just worked out to be able to see it. I am soo glad we did because the kids LOVED it! Ally was screaming to the characters and waving to them. And she thought for sure that everyone was waving to her.
- Watching the kids with Nama/Papa/Aunt Denny and seeing the love they have for them.
- The kids swimming. I couldn't believe how brave they have become. And really makes me sad that we no longer have a pool in our backyard. 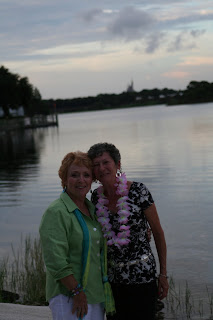 it would be one of our dreams come true to visit the Disneyland, my kids simply love those Disney's characters.