Flag Football comes to an end.... 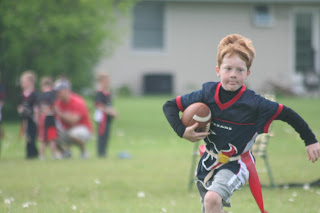 Saturday Jack had his last Flag Football game of the Spring Season. He walked away with a better understanding of the sport and no desire to play it again. HA! No seriously he told that night in bed that he thought Football was boring. I asked him why he felt it was boring and he said because all you do is run back and forth. Plus, you keep having to stop and start. Pretty funny I have to say so myself. I said to him well you like soccer and that is running back and forth. But, he said at least with Soccer you are kicking a ball as you run back and forth. From the mouths of babes. :)

So, I don't know that we will be taking up football again anytime soon. Chad would like him to try it again, but I am not pushing that one. His passion is with soccer and baseball. Which is fine by me. :) Check out pictures from his last football game by looking at the Sports Season slide show at the right. He even got to play his cousin Hayden for his last game which probably made it the most fun for him. They had fun chasing each other. And they were giving each other signs like that they were going to take each other down. Pretty funny we thought.
Posted by Unknown at 7:54 AM