This weekend was the end of the kids indoor soccer league. So, now they take a break for a few weeks and rest up for the outdoor league that they will start later in the month. We are looking forward to getting to be outside to play soccer. Meg made a couple goals thru the indoor league which was very exciting for her. This picture is after she made one of her goals. If only you could see how excited she is in person. It is so neat to watch! 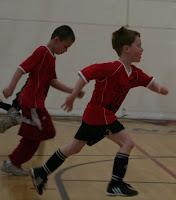 Jack continued to shine in soccer. He has a couple trademark moves with soccer. First, he always has his tongue sticking out when he is kicking or running. It is the funniest thing. And then he has a killer kick. He has taken some kids down with it. He doesn't know his own power that is for sure. I love watching him play because it makes me think about the fact that my grandpa Jim, came to the USA to play soccer from Scotland. And you just wonder if he is watching down on Jack and running along side him give him that extra power to kick hard. :) Makes us feel good that it is something that he is very passionate about.
Posted by Unknown at 8:31 PM