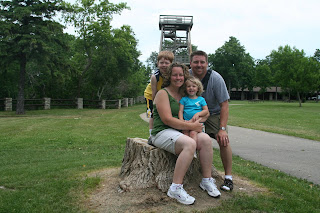 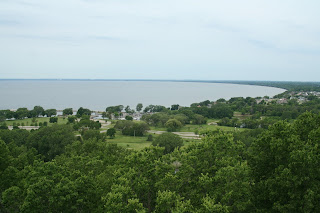 So, this past weekend we took Jack and Ally camping at High Cliff State Park. The park is only about 20 minutes from our house. Meggan is on vacation visiting Nama and Papa, so she was not able to go with us. But, I think it was a good thing for her. There were a lot of mosquitoes and Ally had a major meltdown on Saturday afternoon that brought us home early. :) 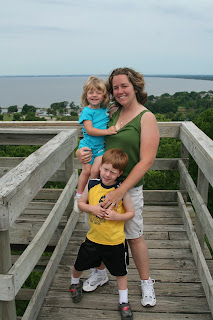 We got to climb up a tower so we could overlook the pretty view of Lake Winnebago. That was a lot of fun to climb. Ally was quite the trooper with her short legs walking up all the stairs on her own. Because she would have it no other way. :) We also went on a nice bike ride around the Butterfly pond. We heard a lot of birds on that bike ride that had Ally ever so interested in them. 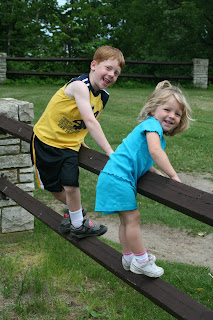 After the bike ride Chad and the kids went for a walk and checked things out. They also got to play at some parks which always makes for a good time. We had a picnic lunch down by the lake which was fun for everyone. We also had a nice visit by some Raccoons which made for an interesting night on Friday. Oh boy were they loud! All in all, it was a good time, but we sure did miss Meggan as you can see from this pic below!