Am I going to lose my eyeball??? 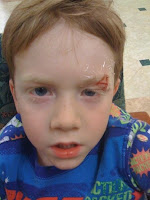 Well last night we thought we were going to have a low key night. We were going to read books after baths and showers and just relax. So, there were are getting Jack dried off and dressed. He went to put his arm out on the bed and at the same time Meg decided to push him and goof around. Well he missed the bed and hit his head on the bottom of our bed foot board. Which of course has a piece of decorative metal (that is smooth) that runs across. He pulled his head up and there we had a big opening over his eye. 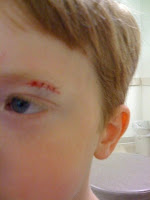 We could not tell how big of a cut it was until the blood stopped. Once it stopped we attempted a butterfly band aid, but I thought it looked pretty deep. So, I had my friend Christie come over and she said Yeah he needs to go to the hospital. Sure enough we went to the hospital and they had to give him 4 stitches.

Jack had 2 concerns: 1) "Are they going to remove my eyeball?" and 2) "Don't let Meggan touch my other eye because I don't want her to hurt that one."
Posted by Unknown at 9:29 AM

Rusty's music of the heart said...

oh my sweet Jack.....you make me laugh so hard! We love you very much and are sending gentle kisses to you on the wings of an angel.
Nama and Papa