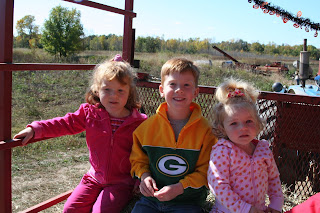 So, at the beginning of October we did something that we had never done before. We went to a farm that has a pumpkin patch. It was the greatest thing. Me never having done that except maybe as a kid. I was so excited and wondered what it would be like. I would never do it any other way now. The kids were sooo excited to get to pick out their own pumpkins. We did not help them at all. Whatever they wanted they got. Couple of the pumpkins are green/orange.And strange shaped. But, we let them pick whatever their little hearts desired. It was really a blast.

The farm that had it is located in Winneconne. My neighbor, Christy, told me about this "Day on the Farm". You pay for the pumpkins by donation, so for you Chicago folk you given whatever you want. WOO HOO!! Me in my Chicago mindset felt we should give more than we did since we walked away with about 6 pumpkins, but Chad said No this is how it is. There you have it.

We got to feed the animals and go on a hayride. It was a great time. We will probably keep going back there, because it was such a nice relaxed setting. Not crowded and cheap fun!! We couldn't get home fast enough for the kids to put their pumpkins outside in their place for the season.