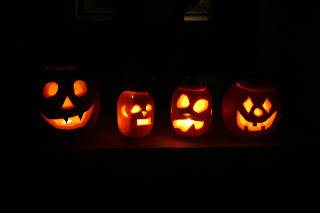 Tonight we spent carving our Jack-O-Lanterns. Jack and Meggan are at a fun age for this because they were able to draw what they wanted their faces to look like and we carved them exactly how they drew them. Of course we did have them help us with the scooping out of the "meat" and seeds.

We then took the seeds and cooked them in the oven. It is very easy to do. If you have never done this here is a simple recipe.

Lay the seeds in a pan lined with tin foil. Spray with cooking spray and salt (or garlic salt). Cook them at 250 degrees for 1 hour. Every 15 minutes you are supposed to move them around. See how easy that is!!

So, then we put the pumpkins at our front door to ward off any Phantom Ghosts. We put candles in them and Jack was very concerned about this. He was afraid that the pumpkins would start on fire and then the house would catch on the fire. So, he kept saying to me when we put him to bed please blow out the candles in the pumpkins. Last week was Fire Safety week at school, so I think that made him think of this stuff.

It was also funny because they wanted to have the backs of the pumpkins carved too. We tried to explain that you only carve the front so the candle does not blow out. But, they just starred at us.