Every Girl's a Princess... 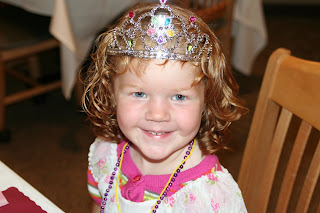 At the community college in Appleton they host an annual charity event called "Every Girl's a Princess". We found out about it because there was a postcard for Meggan in her mailbox at school. At first I was like Hmm what is this. Like Meggan needs any more ammunition on her princess obsession.

So, I looked into the event and it is actually an amazing thing for young girls ranging in age from 2 - 10. It is an event to show girls that no matter what you look like you are a princess. It is quite the self esteem booster for a girl that may have issues with herself. Meggan has no such issues.

So, what happens is the girls have a Royal dresser assigned to them. This is a teenage girl, Emily, in Meggan's case, who is dressed in a beautiful prom dress that takes them around to decorate their wand, pick out a crown, their jewels and a dress. They then get to sit on a thrown and they are royally announced. NO JOKE!!!!

Then they let the girls sit on a smaller throne and get their picture taken with whoever. So, here is the pic of Meg and I. Meg's royal dresser took the picture.

Then you have the option to do a royal tea. Where they bring out little snacks (cucumber and dip, little PB&J Sandwiches, crackers and cheese, chocolate covered strawberries and cupcakes). As you can see from this picture they have a princess doll on each table. It really was an amazing event.

And you would think at the end of the event you give the dress and stuff back. But, oh no! You get to take it all home. CRAZY! And to think I was planning on going to the grocery store when we left. Instead we went home and Chad was like a helicopter landed over in the field by our house we have to go see what is. So, Meg hops on a tricycle (in full princess gear) and jack on his (WITH NO SHOES ON) and we take off running. We get over to where it is and we realize it is the Fire Departments Open House. So, Meggan goes thru the open house and every fireman told her she was a beautiful princess. I am sure people were like what is going on here. Meg just told everyone that she was a princess. GOD BLESS HER!!! She ended the day saying it was nice being a princess today. And she asked if we could take Ally and Nama to the event next year. I don't know if I am ready for Ally to be doing this stuff.
Posted by Unknown at 9:30 PM