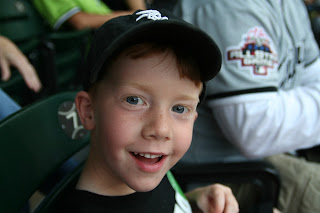 Last night we had a lot of screaming at our house by the kids because of the White Sox winning. Jack was sooo excited it was crazy. They were running around the house screaming and dancing. He called his Papa to tell him, as if my dad did not already know that they won. He gave him the play by play of how it ended. He said "Out Out Out". It was quite amusing. So, it will be interesting in our house if the White Sox continue to win and end up having to play to the Milwaukee Brewers. Poor Chad will be alone. LOL
Posted by Unknown at 7:06 AM